The Statkraft Winter Trail Series is the highlight of North Highland Harrier’s year, offering a number of trail runs in beautiful locations in Caithness and Sutherland, plus there is great home baking on offer after the running.

The series started at our sponsor Statkraft’s wind farm at Baillie on 13 October. It was a great start to the series with a sunny autumn morning, the run offers stunning views across the Pentland Firth to Orkney. There were two distances on offer, 2.3 miles and a hilly 5.1 miles with 34 runners taking part in total. It was good conditions underfoot and road shoes were the preferred option on the day. First male on the longer route was David Spencer, first female was Jayne Klimas and first junior was Cameron Charlton. Two runners completed the shorter route Debs Larnach and Jacqui Oag. The range and standard of runners varied from 35 mins to just under an hour for the long route so there is always someone around your pace to keep you company. The handicap system used at the trails gives the less speedy runners a good head start and allows everyone to finish around the same time. Full results can be found here.

On 27 October, 35 runners gathered at John O’Groats on a very windy morning. The John O’Groats trail is one of the favourite trails, with a challenging route and amazing views. First male on the 5.9 mile route was Darren Sutherland and first female was Jayne Klimas.  On the 3.75 mile route, first male was John Budge and first female was Fiona Stockan. Full results can be found here.

The third trail of the season was held on 10 November and a beautiful day greeted the runners for the Olrig trail. Starting and finishing in Castletown this route offers mud, gravel, grass and tarmac. The Olrig trail takes the runners out of the village and up the challenging incline towards the Olrig mast. Stunning views of Dunnet beach and the striking cliffline from Dwarwick along towards Dunnet Head were appreciated on the fresh sunny day. The long route of 6.5 miles was completed by 38 runners with first male finisher of Kenny MacGruer, first female for the hat trick was Jayne Klimas and first junior was Connor Miller. Eight runners completed the shorter distance of 4.7 miles with Alistair Geddes first male and Jodie Henderson first female. Full results can be found here. 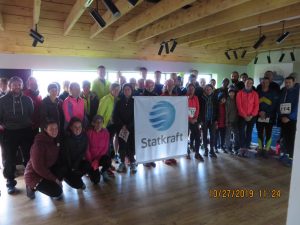